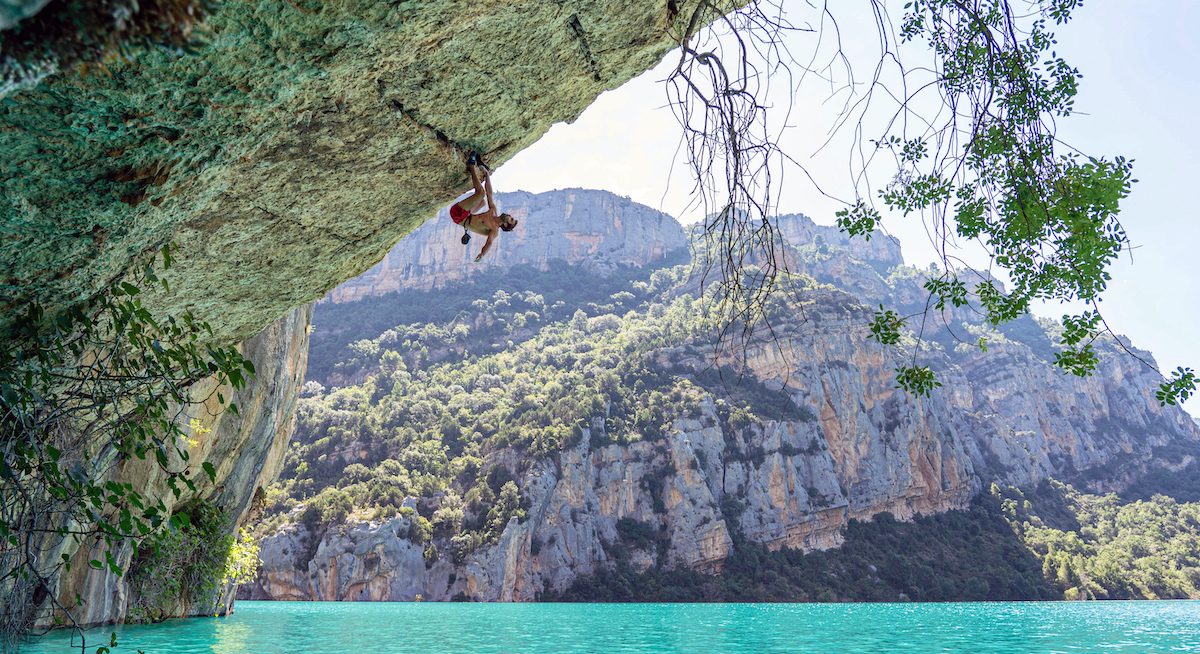 Summer in Spain is the time for psicobloc. The heat and humidity drive climbers like Chris Sharma to the sea in search of cooler temps, clean rock, and the next king line. But with lockdown restrictions in limbo, Sharma wasn’t sure if he’d be able to make his annual trip to Mallorca this year, and he took the opportunity to explore a little closer to home. “Mallorca is probably my favorite place to ever spend time in, but it’s really cool to have Mont-Rebei as a second option for deep water soloing,” he says. “It’s a unique experience—a totally different vibe than being on the Mediterranean.”

Mont-Rebei, located approximately three hours to the northwest of Barcelona, is a remote, inland river gorge with bright turquoise water lapping at the bases of steep limestone cliffs. “It’s one of the few spots in Spain where there are no roads, and the landscape is stunning—huge walls, tropical-looking water, fig trees growing out of nooks and crevices,” says Sharma. “The fact that there’s no way to access it except by foot or by boat makes it that much more special.”

Despite the challenges of the pandemic, he managed to make a few day missions out to Mont-Rebei, complete with a five- to six-kilometer kayak approach, and established a new 15-meter high deep-water-soloing line, which he named Trick or Tree. “Whenever I can get time to go out and do some climbing, it’s just food for the soul,” he says. “It always has been, but now more than ever.”

We caught up with Sharma to learn more about his new route and deep water soloing around Mont-Rebei.

How are things with you? Everyone healthy?

Yeah—knock on wood—that’s the most important thing. It’s been a pretty crazy year, though, huh? For everybody. We’re just trying to get through it and do what we can.

Have you been able to get outside to climb?

Despite everything, we’re still trying to make time for climbing, which is extra challenging with two kids at home. It’s all about making these surgical strike missions, you know? We’ve got some good sandstone bouldering just outside of Barcelona that I’ve been developing with my buddy Pol Roca. And I’ve managed a few day trips out to Mont-Rebei. We leave at the crack of dawn and get back super late at night, but it’s only one day, in and out, and I’ve found that’s the best way to keep the balance.

Has there been much climbing development around Mont-Rebei?

There’s a lot of rope climbing, but for deep water soloing, I don’t think anybody’s really touched it. First, it’s remote—you need to kayak five or six kilometers to get out there—and the lines are not super obvious. The rock quality isn’t like Mallorca. A lot of it is chossy. But there are certain spots with these really killer lines. It still feels pretty adventurous.

Tell us a little more about the project you recently completed, and how you found it.

There are three or four main cliffs around Mont-Rebei that are good for deep water soloing. We’ve paddled past this one to get to other spots, but hadn’t really explored it yet, so it was on our list. It’s cool when a project emerges organically—in this case, we went up to Mont-Rebei, I thought there could be some lines in this cave, and it all worked out.

The climb starts with this beautiful sequence across a diagonal roof crack. It’s not a crack climb in the traditional sense—there’s no jams or anything. It follows these little pockets and crimps. But it’s cool because you’re immediately pretty exposed and high up, and you’re climbing feet-first out the roof. And so, it’s pretty exciting.

One you make it through the roof section, you get a quick shake out, then climb a blocky section into these underclings and a crux at the end. The route is continuous, steep, and pumpy. There are no spots for a good rest, so you have to maintain body tension, working to keep your feet on the slopey foot holds. It must be about 15 meters tall, so it’s the perfect height for deep water soloing.

We called it Trick or Tree, because there are these trees on the wall and you end up climbing a couple to get to the finish. It’s always hard to grade these things over the water. But I would imagine it’s around 8b+ [5.14a] or something.

It was great to put all the pieces together and have a moment when everything clicks, especially during these challenging times. Reconnecting with that feeling of flow helped me recharge the batteries.

Does the long kayak approach change your mindset or make you more cautious in your climbing?

I always try to be cautious, prepared, and make good decisions. Even when we’re climbing over the water in Mallorca, it’s very exposed and oftentimes isolated. And there’s usually no cell reception. So, in these places you are on your own. It’s good to think about those things, and be conscious of the choices you make, right? At the very least, have a buddy in the water with a kayak or float.

Did you take any bad falls or were they all pretty clean into the water?

All pretty good. Honestly, I haven’t had any bad falls. Knock on wood. But I think you always have to be in tune with what you’re doing. That’s one of the reasons why I love it. The feeling to be 60 feet up at the lip of a cave, and just dangling by your fingertips, chalking up, and getting ready to go for a crux move. It’s so extreme and wild and spectacular, and yet controlled and safe, too. I fall from those positions all the time, so I feel really comfortable with it.

When you’re developing a steep deep-water-solo line like this, are you working ground up the entire time, or do you rap in to clean it and figure out the moves?

A little bit of both. Trick or Tree starts with this roof seam, and I did the first couple of tries ground up. I was able to get pretty far out and saw that it was actually super good quality and worth doing. So then, to figure out the crux higher up, I came in with a rope and cleaned it up a bit, scoped out the holds, and brushed it.

In general, what attracts you to deep water soloing?

For me, sport climbing is often so much about performance. Of course, it’s also about the line, the place, the route, the holds, the movements, and everything, but a big part of it is pushing your limits. I have a hard time disconnecting from that mindset, and so when I go sport climbing, it’s very much about these projects, and it’s kind of serious, you know?

The beauty of deep water soloing is that it’s such a free form of climbing. It’s like, oh, look at that cool feature. Let’s just go up there and check it out. You’re out there exploring, and feel like a kid again, climbing up a tree. It’s very playful, spontaneous, and creative. It allows you to interact with the wall and with nature. You’re not thinking about the grade.

As long as you’re respecting the place and others, there’s no right or wrong way to do it. And then mix in the water, the approach via boat, being out on the lake all day with your friends, hanging out, swimming, and it’s this amazing, full-package experience. For me, psicobloc is climbing in its purest form.

What’s next? There’s another amazing deep-water-solo line on the same wall that’s going to be a lot harder. I’m looking forward to going back. It never ends. Every climb is just one stepping-stone along the way.