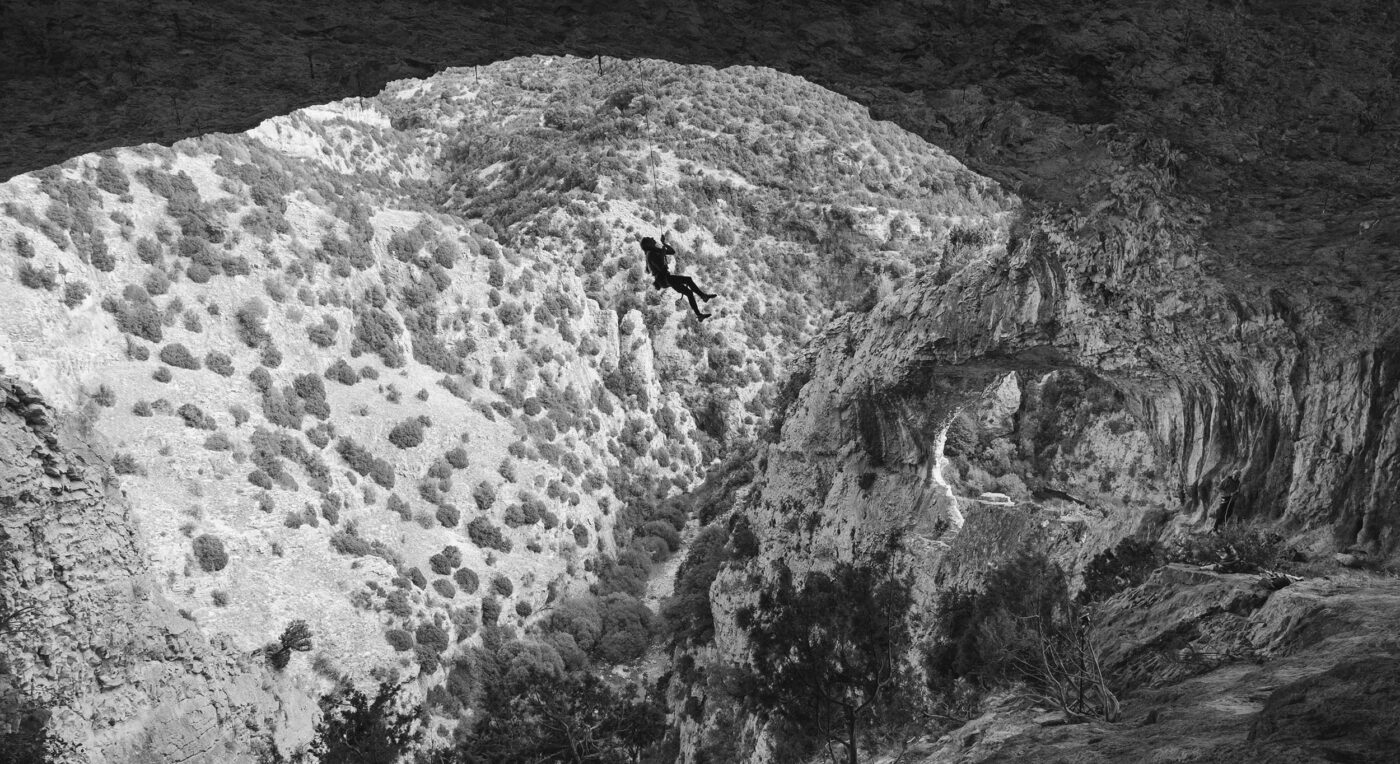 Climber parents often dream of the day their children will share the same passion for the rocks. For many, that poses a predicament: How do you introduce your child to the sport without adding pressure so she can fall in love with it on her own?

French climber Philippe Dufraisse went with a laissez-faire approach. He would bring his daughter Alizée out to the crag on the weekends, let her run wild, chase snails, and climb a route or two if she felt like it. Little by little she took to the lifestyle and in the process quickly surpassed her father on the rock.

While many kids grow up and drift away from their parents, climbing has only strengthened the Dufraisses’ father-daughter relationship. “I think we are really lucky to share the same passion,” says Alizée. “For so many people, their careers or ways of living take them far from their parents and they don’t have the chance to spend much time together.” Now 33 years old and a professional climber, Alizée still gets out frequently with her father, and says she’s a better climber for it—the only difference being, she now gets to act as the rope gun.

Here, Alizée and Philippe speak on mentorship, how climbing has affected their relationship, and the lessons they’ve learned together over the years.

Q&A with Philippe and Alizée Dufraisse

Philippe, when did you introduce Alizée to climbing?

[Philippe] Alizée discovered the cliffs when I started climbing in 1995. She was 7 years old at the time.

Did she take to it quickly or was she not interested at first?

[Philippe] She immediately loved the magnificent setting of the cliffs, climbing trees, visiting caves, sleeping in a tent or in a lodge, having fun with her friends at the base of the walls, and sometimes climbing a route, but at first climbing was not the main thing for her.

Alizée, do you remember your introduction to climbing?

[Alizée] My parents were divorced at the time, and I spent the weekends with my father, going to the crag with friends. So I started discovering climbing slowly by being surrounded by it, being in nature, having fun with other children, and being immersed in the lifestyle.

At the beginning I sometimes asked if I could top-rope, and on the home climbing wall in his garage I would do a little circuit on the elephant holds when he was out there training with friends. Then I started to do more and more as I grew up.

What were those early experiences like? Did you love climbing right away? Did you feel any pressure to do it because of your father?

[Alizée] I was very scared of climbing at first, but I loved moving on the rock and the fact that when you climb you forget everything else—you are fully focused and try to deal with your fears. I also always wanted to reach the top, never going back down if I didn’t touch the anchor. I never felt pressure, even though I always wanted to show him (and others) that no matter what they think, I could do it. I tried to impress him, but since he always believed in me, he was difficult to impress and I had to try hard to do so.

Can you share some of your favorite early memories of climbing together?

[Philippe] In 1999, I believe, we went on a one-week outing with the climbing club to the Verdon Gorge. There were 25 adults and children all together. Alizée discovered rope maneuvers and multi-pitch routes. She was in her element, happy, like she had been doing this forever. That’s when I understood she had fallen in love with the activity and that her passion would never stop.

[Alizée] I remember the first years I started going climbing it was mostly with my father, his friends, and my cousin Julie. I had a lot of fun with her, playing in the woods, inventing stories, trail names, chasing snails, etc. Then, when I wanted to climb, I would just go and ask if I could do a tope-rope. It was very fun. My father was always available when I wanted to climb something, but never pushed me to do so. Sometimes I wanted to climb, sometimes I did not.

Philippe, when did you realize Alizée was a talented climber, and what did that feel like as her father and a climber yourself?

[Philippe] Before rock climbing, I practiced pole vaulting and trained in this discipline. Alizée was a talented pole vaulter, herself. I immediately saw that she had exceptional qualities and that she had everything to flourish in this outdoor activity.

In any parent-child relationship, there’s usually a moment when the younger climber surpasses the older climber. Phillipe, do you remember when that happened and what that felt like?

[Philippe] It all happened very quickly. In 2003, when Alizée was in her second year of serious climbing, she did her first 8b [5.13d] in May at 15 years old, then an 8b/8b+ [5.13d/5.14a] in July, and, against all expectations, she won the youth World Championships in September. It was not very difficult for her to overtake me.

Do you still climb together frequently?

[Alizée] Of course. My father mixes his year between climbing with his friends in France and coming to join my partner and I, often in Spain, to support me, but also to climb himself. Often, when he comes to Spain, it is trickier for him to focus on his own climbing since I am still a very demanding child [laughs].

I am very focused, and he loves trying to help and support me in the ways he can when I am involved in my projects. But his friends come to join us regularly in Spain, too, and he has time to climb with them and with us when he wants to. Now I sometimes put up the tope-ropes for him and belay him on his projects!

How has climbing affected your relationship?

[Alizée] My father and I love the same things: being outside, in nature, on the rocks, pushing ourselves climbing, and sharing moments with our friends, so we can still share a lot of time together!

[Philippe] It has strengthened our father-daughter relationship. We like climbing together as much as each other. It surprises some people, but generally it makes a lot of people admire the relationship we have.

Alizée, what have you learned from your father over the years?

[Alizée] My father impresses me in a lot of ways. When he has a project and he is able to do all the moves, no matter what, he’ll send it. He has the capacity to believe in himself and put everything together to fight until the very end. Climbing with him has shown me the way to be confident.

I would love to have the same tenacity that he has. I still have some barriers—I think too much about unnecessary things that waste my time, and I am not the most confident in my climbing. It’s taxing to force myself to focus on the positive all the time. Being around him makes me remember the game of climbing: It doesn’t matter how you feel or how you look on the project. If you want to do it, you can!

Philippe, you have been Alizée’s mentor in many ways, but has she taught you anything in return about climbing over the years?

[Philippe] Alizée showed me that I had a lot of work to do on the psychology of training, and that I had to adapt to quality, not quantity.

As her father, would you have done anything differently regarding climbing?

Alizée, do you think you would be where you are today without his influence?

[Alizée] I was lucky that my father introduced me to the world of climbing. I never felt pressured to live a “normal” life and fit in to society: going to school, getting a good job, trying to make more money, being seen as successful. On the opposite, he has shown me an alternative way of life where you can live simply and freely in nature, in a space where you can learn and grow as a person.

That doesn’t mean I stopped school or anything, but I did it differently. I studied remotely from university onwards, and I start my Ph. D. next year with the same freedom of being where I want to be so I can climb.

My father let me choose what I wanted to do. He shared his knowledge, but never imposed anything, and emotionally supported me along the way. He was there for me during the hard moments, and during my success, too. He knows me better than anyone else.

I would never be the person nor the climber I am now without him. I am glad and proud to have him by my side!

Editor’s note: Philippe Dufraisse’s responses have been translated from French.