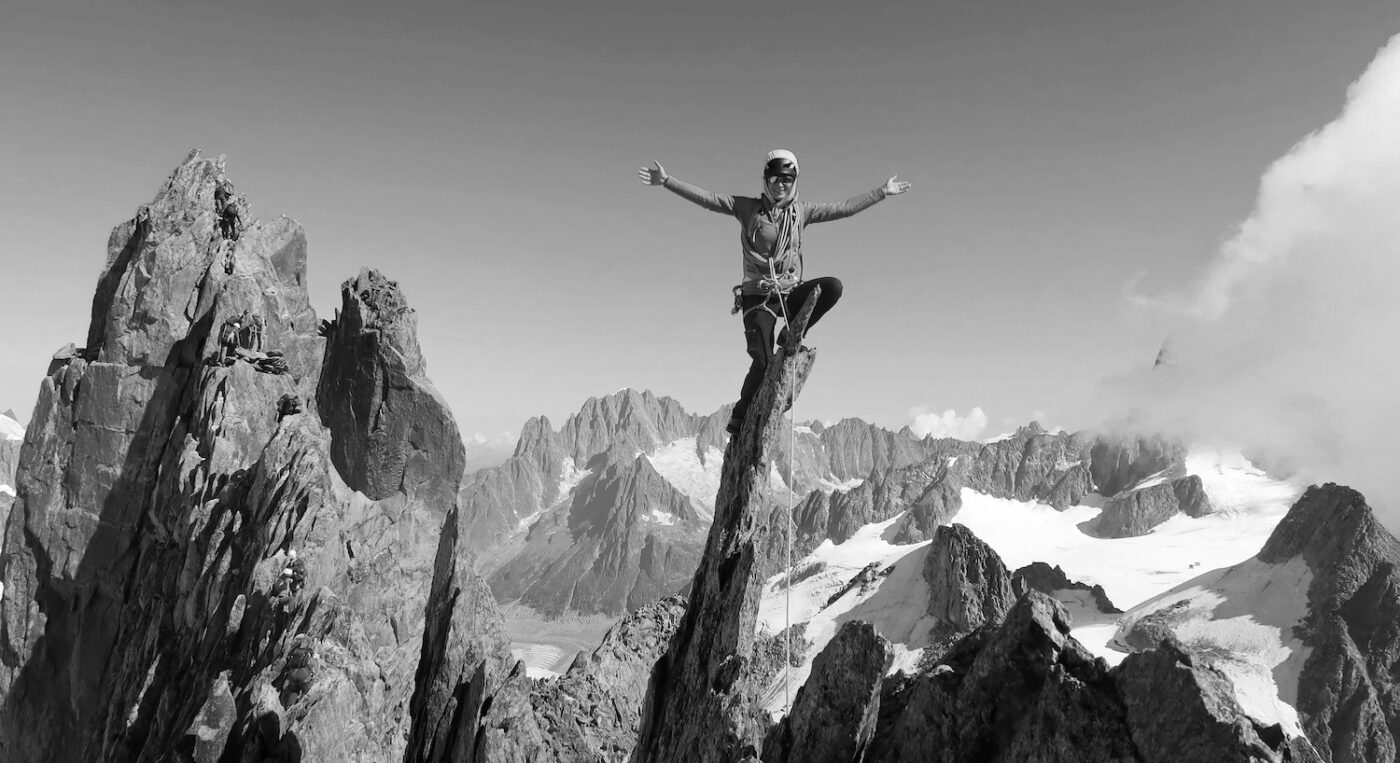 The Alps are in Lise Billon’s blood. Born in Romans-sur-Isère, France to climber parents, she was raised on the mythology of the mountains. She cut her teeth on the local crags around her hometown before looking beyond to higher peaks. It was only fitting, then, that she would follow in her father’s footsteps to become a mountain guide herself.

The 32-year-old alpinist’s love for exploration and the mountains has taken her all over the world, from the great north faces of the Alps to Alaska to Patagonia, where she has opened challenging new routes, including L’Odyssee and La Illiade in Alaska’s Revelation range, and the 900-meter Ballas y Chocolate on Cerro Adela Norte in Patagonia. In 2016 Lise and her team won the coveted Piolet d’Or for their first ascent of Hasta las Webas (1000m ED) on Cerro Riso Patron, Patagonia. She lives in Chamonix, France, where she is a certified mountain guide and works for the Compagnie des guides de Chamonix.

We spoke with Billon to learn what it takes to become a professional mountain guide, what the job entails, and the hard-earned wisdom that has kept her safe in the mountains.

How did you discover climbing?

Did you dream of becoming a mountain guide yourself when you were a kid?

Well, at first, I wanted to be a professional photographer and chase arctic wolves in northern Canada, but I think that wasn’t such a good idea. [laughs]

So, yes, I would say I wanted to be a mountain guide when I was pretty young, around 12 years old or so.

I think it was because my father was a mountain guide, and I grew up with the mythology of being in the mountains. My father was a big inspiration. There were also climbers in my club who were maybe five years older than me and training to be mountain guides, and I was like, wow, that looks very cool. I want to do that.

What’s the training process like to become a mountain guide in France?

The process is quite long. First, you have to be passionate—it won’t work otherwise. Before you even begin the courses and take the exams, there’s a very big list of routes you need to do to prepare, and that can take years. At the beginning, it’s good to just go into the mountains, not thinking about the list, to gain your own experience and to grow as a mountaineer first, before becoming a guide.

When you complete the list of prerequisite routes, you can take the entrance exam. It’s quite tough and takes multiple days. There are several parts to it: the ski section, the climbing section (with mountain boots), then you have a full week of mountaineering with teachers who watch you to see if you have the good skills and if you don’t have any dangerous behaviors. So that’s why it’s very important to have the experience beforehand to feel confident on the exam. Once you pass the exam, it allows you to enter the educational component, but it doesn’t mean you can guide clients yet.

As an aspirant guide, you are still quite restricted and can only guide easy stuff at low altitude because it’s very different to go into the mountains for yourself than bringing someone else. You’re an aspirant guide for two and a half years, and during this time you take more classes, like in ice climbing and ski touring. Before the end of the process, you have another list of routes to complete—routes you have done with clients, and more routes you’ve done for yourself, with some specificities. It’s quite a long list.

In the final months, the instructors judge your skills and how well you work with people. And at the end of the month, they say, okay, you are able, or you’re unable. If you pass this final approval, then you are a fully-certified mountain guide.

What advice do you have for younger climbers who are interested in becoming a guide one day?

First, I would say that it’s very different to be a rock climber than a mountaineer. I wasn’t exactly aware of that when I started. Being a good rock climber doesn’t make you a good mountaineer. When you’re in the mountains, you’re dealing with much greater risk and objective dangers, like seracs and rockfall, along with the weather and changing conditions. You need to have a wide range of skills and experience to make tough decisions you don’t normally face while you’re just out rock climbing. So, I think it’s good to start a little later in life when you have a bit more maturity. You don’t want to be overpassed by your ego.

What’s your favorite part of being a guide?

Being in the mountains. I’d prefer to be in the mountains than in an office, any day. I feel pretty lucky to be outside every day. I think it’s a very good thing for me.

Do you have the flexibility to choose when and where you work?

Yes, it’s 100 percent freelance work, so you just choose when you want to work. But, obviously, there are some seasons when there is a much higher demand for guides, so you have to be there if you need some money. February, March, April, and July and August, those are the five months where you have less flexibility because they are the five biggest months in the year [for guiding in the French Alps].

Because you’re freelance, you can always arrange your year however you want, which is a very cool part of being a mountain guide. You can do it like a standard 9-to-5 job, taking the lift, doing classic routes, and going back home quite early. Or you can take people on expeditions to remote places wherever you want.

Have you had to make any sacrifices in your personal climbing?

Yes, and that’s the toughest thing. As a mountain guide, you can’t climb for yourself as much. The other hard thing is that, just as being in an office, when you are outside every day with clients, you lose energy. You have to find the motivation for yourself, so when you have your free time, you still have the energy to climb.

Does it ever begin to feel like work because you’re doing the same thing over and over again?

Well, it can, and even more so in Chamonix because we have the list of very classic routes. But for me, I’m also coaching the national alpinism team, so I’m varying the practice of being a mountain guide. For me, it’s never annoying to go on classic routes over and over again, because classic routes are classic for a reason. They are beautiful, you know?

When it’s very snowy, and it’s cold, and I’m a bit sick, I’m not super happy to go outside [laughs]. But, you have to, when you are a mountain guide. Sometimes you are out in weather you don’t want to be in. That’s the nature of the job.

What are the greatest lessons you’ve learned in the mountains and in the process of becoming a guide?

In becoming a guide, I’ve learned to be more confident. As a mountain guide, you’re the one making all of the decisions and you’re in front of your clients. You’re responsible for their lives, as well as your own. It’s not the same as climbing with a partner for fun, when you make decisions as a team and decide how much risk you’re comfortable with. When you’re guiding and when the conditions are not good, you sometimes have to be very strong in front of the clients to say, no, it’s not a good time, we must turn around.

And in the mountains, I’ve learned to be more humble. You have to—if you want to stay alive.

When I was climbing Cerro Torre in Patagonia, my partner pulled off a big piece of rock and fell below the belay. I thought he was dead. I almost died because a piece of rock fell 50 centimeters away from my head. He broke some vertebrae, broke his hips. He lost a lot of blood internally. We had to rappel down by ourselves. There was no helicopter in the area at the time, so the rescue team had to hike for 10 hours to reach us, and then carry my partner back to El Chaltén. It took 32 hours in total. We were lucky we survived.

At the time, I was very young and inexperienced. We had just done a big first ascent and we were feeling successful, but that was the wrong feeling. We were not invincible.

Accidents rarely happen by chance. They’re usually the result of poor decisions. And in the mountains, even a small accident can have big consequences. It was good that we learned this lesson, but it’s much better if you can learn without accidents.

In the mountains, you need to be confident, even a little audacious at times, but humble—it’s a fine line.